“I love a good plot twist and Bleddyn Hall is far from the expected kind of story of this time period.

“My absolute favorite part of this was Amanda’s writing style. She gives you the sense that you are actually living out a day in the life of the actual historical period. Her character’s language never slips into modern tongue, but they are still remarkably understandable. I loved this book and would read anything from Amanda Shalaby that came my way!” – Andra

Read the full review HERE and #EntertoWin an ebook copy of Bleddyn Hall!

Bleddyn Hall is the third book for Amanda Shalaby, and I have been lucky enough to read her previous two historical romances. Having read two books by Ms. Shalaby I was eager to get started on Bleddyn Hall and in my opinion I’d say she has another hit on her hands. Bleddyn Hall is filled with everything I’ve come to enjoy in an historical romance. Blossoming love, courting, fancy balls and gowns, a dashing hero and feisty heroine, all with a perfectly good mystery thrown in… The the FULL REVIEW HERE!

****Scroll Down for the Chance to Win either a 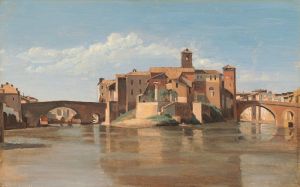 My stories begin with four things: a hero, a heroine, an ending, and a setting.  Once I have those I can begin to construct conflict, motivation and plot. Of the four sometimes setting comes first.  My new release, Dangerous Secrets began with the question, “Can I write an regency romance set in Rome?” Why not!

Setting can be an important force in any novel. It is critical however that the subtle details of place be integrated in every scene. This is as true for a traditional regency set in London ballrooms and drawing rooms as it is for more exotic settings. It isn’t enough to just plunk the story down somewhere.

In the case of Rome it helped that I have been there a few times.  When I put the hero’s room in a run down neighborhood, I chose Trastevere, the place “beyond the Tiber,” the wrong side of the tracks, so to speak with its narrow lanes and open piazzas.  When I put Nora and Jamie at a sidewalk café near the Tiber Island bridges, it helped that I had walked over them.  The Count’s palazzo and Nora’s brother’s villa took more imagination, but familiarity with the feel of the city helped.

When personal experience fails, photography helps. Like many authors I’ve begun to storyboard my novels on Pinterest.  Visual cues feed my imagination and help engage the right side of my brain and my creativity.

History and research is critical, of course.  Once I settled on Rome I discovered quite a bit about pre-unification Italy, the Papal States, and the House of Savoy, all of which influenced the final work.  Where there English people in Rome in 1820? Keats, most notably was dying in a house by the Spanish Steps.  Artists of all kinds flocked to Rome.  Did Britain have an ambassador to the Papal States? Not formally. They worked through the Hanoverian delegation.  These details matter in how the characters function.

Another element in creating setting is maps.  I’ve studied more maps of London than I care to count. It helps to nail down neighborhoods and even street names. In 1815 Chelsea, Bloomsbury, and Mayfair existed but would have housed very different folk.  Rome is no different.

When an author can use the sights, smells, and sounds of a place to contribute to atmosphere and emotion, he or she has done well. I try for this, but I’m not always satisfied with the results.  When I am not satisfied, I try again on the next one.

What next? Dangerous Weakness, my work in progress, began with the hero, the Marquess of Glenaire, the busybody brother and managing friend of both Dangerous Works and Dangerous Secrets. My second question, though, was, “Can I put him in Constantinople?”

When a little brown wren of an Englishwoman bursts into Jamie Heyworth’s private hell and asks for help he mistakes her for the black crow of death.  Why not? He fled to Rome and sits in despair with nothing left to sell and no reason to get up in the morning. Behind him lie disgrace, shame, and secrets he is desperate to keep even from powerful friends in London.

Nora Haley comes to Rome at the bidding of her dying brother who has an unexpected legacy. Never in her sunniest dreams did Nora expect Robert to leave her a treasure, a tiny blue-eyed niece with curly hair and warm hugs. Nora will do anything to keep her, even hire a shabby, drunken major as an interpreter.

Jamie can’t let Nora know the secrets he has hidden from everyone, even his closest friends. Nora can’t trust any man who drinks. She had enough of that in her marriage. Either one, however, will dare anything for the little imp that keeps them together, even enter a sham marriage to protect her. Will love—and the truth—bind them both together?

Enter the Dangerous Secrets Blog Tour 2015 contest to win the right to name characters in an as yet not written novella and an Amazon gift card.

Caroline Warfield has at various times been an army brat, a librarian, a poet, a raiser of children, a nun, a bird watcher, a network services manager, a conference speaker, a tech writer, a genealogist, and, of course, a romantic. She is always a traveler, a would-be adventurer, and a writer of historical romance, enamored of owls, books, history, and beautiful gardens (but not the act of gardening).

This book began with the thought, what  could I do with English regency-era characters if I put them in Rome?

Find me today on the Summer of Love website discussing some of our favorite love triangles in literature history!  Think King Arthur, Queen Guinevere and Lancelot. Rhett Butler, Scarlett O’Hara and Ashley. Professor Bhaer, Jo March and Laurie. And that’s just a few! Come read about some of our more modern day examples and tell us a few of your own HERE!

While you are there, don’t forget to Enter the Contest for a chance to win one 3 Grand Prizes—one print romance a week for the entire summer! But that’s not all! We’re also giving away packages of 5 print books to three other winners!

Who are we and what is this? We’re a group of romance writers who want to share our love of romance! We came up with the idea to give away one print romance a week for the entire summer to three lucky winners. That’s 16 books for each Grand Prize winner—an entire summer’s worth of love and passion. But that’s not all! We’re also giving away packages of 5 print books to three other lucky winners!

The contest opens on April 1 and ends May 15, 2015. The winners will be drawn randomly, and we’ll let winners know as soon after May 15 as we can that they’ve won. Each Monday for the sixteen weeks of summer—from Memorial Day to Labor Day—we’ll send out one print book to each of the Grand Prize winners. The second-prize winners will get their collection of 5 books shipped in one package as soon after May 25, 2015 as we can get to the post office.

Please read the full Contest Rules for all the legal stuff.

To enter, go to the Enter the Contest! link, and pop in your information using the entry form there. Your entry adds you to the contest hopper and signs you up for Jennifer Lawler’s newsletter. J Law writes romances under three pen names, and she wants a little love for all this effort. You can improve your odds of winning by entering more than once, but the only way you can enter more than once is to give another romance author a little love, and you can do that by following the directions on the Enter the Contest! page. You can sign up for other newsletters, like a Facebook page, or follow a blog—and each action gives you another entry into the contest.

Over there on the right-hand navigation menu, you’ll find all the authors who are participating in this giveaway, plus information about their books. Enjoy!